There are no danishes in Denmark

I am WAAAYYY behind in my blogging so this week I’m having my friend and dependable eating buddy, Lynn, guest-blog about her food experiences during a recent trip to Europe.

And now Lynn in the role of Rick Steves…
I took a 10-day trip in March 2009, hitting several cities in England and then Copenhagen, Denmark. I had never been to either country before (Ok, the several layovers in Heathrow don’t count), so was excited to take in all of the sights, sounds, and snacks. I had always heard that the food in England was nasty, but I figured that my peasant stock food preferences wouldn’t be too far off from the normal British fare. I was generally correct. I had some good fish and chips, an absolutely delicious Cornish pasty (NOT pronounced like the things burlesque dancers glue to their boobs) with the sweetest, flakiest crust. And the best Indian food of my life! Heard the rumors…well, they’re true. Damn good Indian food. Plus, I ate every chocolate product that Cadbury ever created. And that was just England. Denmark is renowned for its seafood, but I’m not a big fan of products from the sea (other than the aforementioned fish and chips). But I ate pretty darn well in that country too! Good pork, duck, breads, pastries, and beet salads with freshly grated horseradish. Below are some of my more food-centric photos from my trip.

Yes, I turn into a 14-year-old boy every time I see “spotted dick” on a menu. It’s basically a baked pudding that has raisins or currents in it. Never tried it, but had loads of fun cracking up over it. 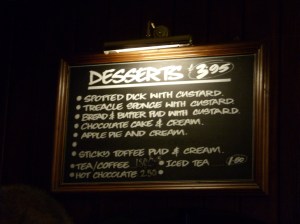 This is a GIGANTIC cupcake that I saw in Harrods. Gucci on your right, Princess Di and Dodi memorial on your left. *^%$@ HUGE cupcake straight ahead. The cupcake fad has hit London and Lola’s is one of the top cupcake bakeries. 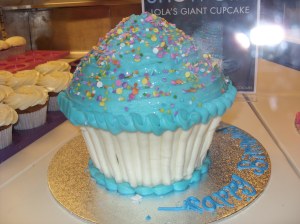 I kept seeing signs for “jacket potatoes” everywhere I went in England. Turns out, it’s just a fancy name for a baked potato. This was my last meal in the UK: a jacket potato with cheddar and bacon. The bacon in England was more like a really, really salty, thinly sliced ham. It was yummy. And they serve beans with breakfast. Strange people. Glad we seceded. 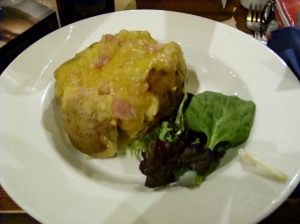 Ok, now we’re in Denmark. We had lunch at a café owned and run by Ida Davidsen, known for her smorrebord (open-faced sandwiches). The fact that there was a slice a bread that came with it somehow made it an open faced sandwich. Yummy duck, potatoes, and beet salad with fresh horseradish. 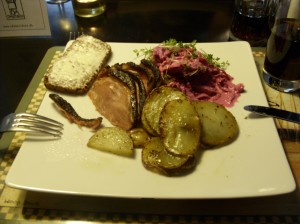 This is my standard American breakfast that I was able to re-create in Denmark. The fun thing about this is that there’s a big ole Nestle logo on the box. 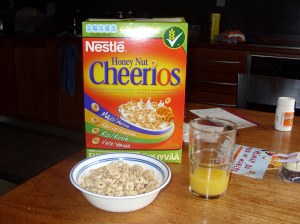 Lunch at Kronborg Castle. The Kronenburger. 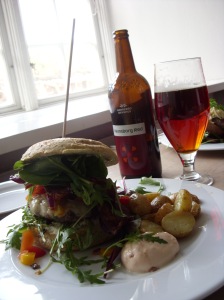 Cracklin’ pork! My friend Torben made a traditional Christmas dinner. Cracklin’ pork has salt rubbed and cooked into the top fat so it’s all pork rindy crispy and you pull it off and just munch on it all night. And they put flags on everything. 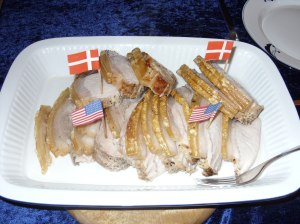 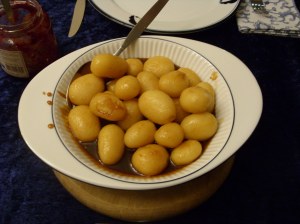 Danes love their “brown gravy.” Problem is, when you make gravy, it’s more golden beige color. So every household has brown food coloring to add to the gravy. 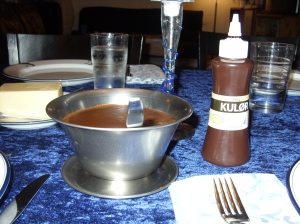 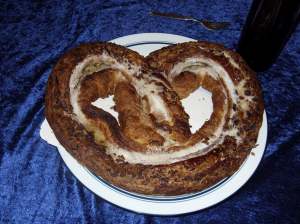 Plate of Danish desserts, plus a chocolate tort from Vienna. 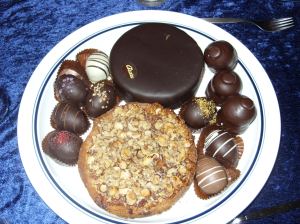 My last morning in Denmark. Traditional breakfast rolls. Some of these rolls were buttery and flaky like croissants. 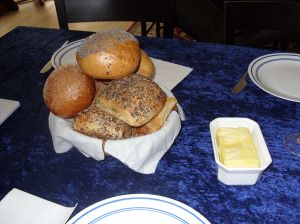