Is Washington, D.C. the capital of cupcakes?

When I was in Washington, D.C. last week, it seemed like no matter where I was in the city, there was a cupcake shop nearby. I unexpectedly managed to visit two of the top shops in the DC area.

After wrapping up a business meeting in Georgetown, I had some time to walk around the area. My friend had told me that I visit Georgetown Cupcake. I asked my DC colleagues about it, and they recommended that I visit Baked and Wired instead.

When I headed out on my own, I had the address of Baked and Wired but no map or directions so I didn’t think I would find it. But after walking for a few minutes, I found myself right in front of the shop.

I loved the way they display the baked goods under glass–especially the cupcakes.

I decided to try a strawberry cupcake. The cake itself was a white cake embedded with strawberries, and the frosting was a very rich strawberry buttercream. The cake was moist and had a good texture, and while I liked the flavor of the buttercream, it was way too buttery for me. I like an equal ratio of sugar and butter in my frosting.

Capital Pride was going on while I was in Washington, D.C., and Baked and Wired showed its support with this lovely rainbow unicorn. 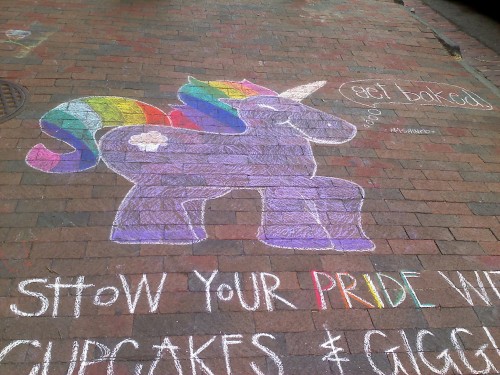 I didn’t remember that CakeLove is in DC until I ran across it while my friend and I were walking on U Street.

Unfortunately it was closed, but then I saw just across the street a place called “Love Cafe.” It is related to CakeLove and offers espresso, sandwiches, salads and of course sweets.

Everything looked great, and I had a really hard time deciding what to get. I finally chose an orange and chocolate cupcake (I had this flavor of cupcakes at my wedding).

I didn’t get around to eating the cupcake until three days later back in Seattle. I was a little hesitant about eating a not-so-fresh baked good that had traveled thousands of miles, but it seemed like a shame to throw it away.

The cupcake had survived because it was nestled in parchment paper and in a sturdy plastic box. When I unwrapped the paper, I was immediately hit by a fragrant burst of orange from the buttercream. I bit into the cake, and it was unbelievably moist and chocolately.

What a great souvenir.

4 responses to “Is Washington, D.C. the capital of cupcakes?”