Scripps Networks Interactive, the company that owns both the Food Network and Travel Channel, has taken unimaginative programming to new heights by running two sets of nearly identical shows on both channels.

END_OF_DOCUMENT_TOKEN_TO_BE_REPLACED

Is Washington, D.C. the capital of cupcakes?

When I was in Washington, D.C. last week, it seemed like no matter where I was in the city, there was a cupcake shop nearby. I unexpectedly managed to visit two of the top shops in the DC area.

After wrapping up a business meeting in Georgetown, I had some time to walk around the area. My friend had told me that I visit Georgetown Cupcake. I asked my DC colleagues about it, and they recommended that I visit Baked and Wired instead.

When I headed out on my own, I had the address of Baked and Wired but no map or directions so I didn’t think I would find it. But after walking for a few minutes, I found myself right in front of the shop.

I loved the way they display the baked goods under glass–especially the cupcakes.

END_OF_DOCUMENT_TOKEN_TO_BE_REPLACED 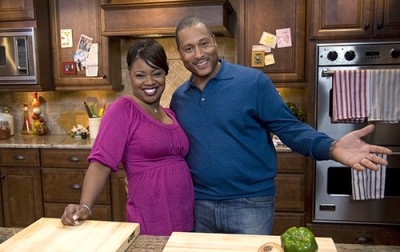 During February, Food Network ran a curious promo spot. It featured two of its newest personalities (pictured above) who said, “Hi, we’re Pat and Gina Neely, hosts of Down Home With the Neelys. Join us and Food Network as we celebrate Black History Month.”

Every time I saw the spot, it bothered me, but I couldn’t pinpoint exactly why. It finally came to me a few days ago. What exactly was the channel doing to celebrate Black History Month? Featuring classic African American recipes on its Web site? Examining George Washington Carver’s influence on food and agriculture? Highlighting the nation’s top black chefs? Uh, no.

Instead it ran this awkward promo that had the feeling of being put together at the last moment. It was like someone said, “Oh yeah, we have to do something for Black History Month. Anyone available?” (Cue chirping crickets.)

I watch Food Network constantly, but until now, I’ve never considered just how lacking in diversity it is. Sure, there are two or three shows hosted by black people, that one Latina lady and those gay guys. But by and large, Food Network’s leading personalities are mostly–as Dave Chappelle would say–white dudes. (Yes, I’m aware of Rachael Ray and the other ladies on the channel, but it’s still mostly dominated by men. )

In January, We Are Never Full wrote a post titled “News Shocker! Diversity Finally Comes to Food Network!” that discussed the Neelys and the cable channel’s pervasive whiteness. It also addressed something that I’ve also thought was weird and offensive–the use of dubbing for Japanese chef Masaharu Morimoto. (I’ve always found Jamie Oliver and his thick British accent harder to understand than Morimoto.)

“[The Food Network] completely degrades him every time he’s on Iron Chef by dubbing some dudes voice over his own. HE IS SPEAKING ENGLISH WHEN YOU DUB OVER HIM WITH ENGLISH!!!! I understand he has a strong accent, but at least let us hear the master speak. For fuck’s sake, degrade him a bit less by using subtitles. I wonder if this pisses him off?”

Should I be glad that that Food Network is trying to add some color to its programming with the Neelys and that it bothered to remember Black History Month? Sorry, this time there’s no “A” for effort.

Filed under Essays, Food and race