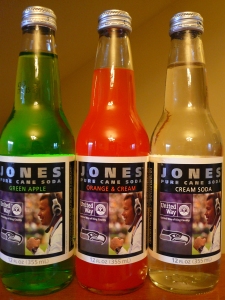 As many Americans did this weekend, I celebrated our nation’s birthday by doing what else–grilling with friends and family. At one barbecue I attended, I was surprised and delighted to find United Way-branded Jones Soda in the cooler. The bottles feature Seattle Seahawks head coach Jim Mora and are helping to raise awareness about United Way’s Climb for the Community. (I work for United Way and my team produced the labels for the soda.)

Buy a 24-pack of the limited-edition Jones Soda at Costco and other fine retailers, and a portion of the proceeds will benefit United Way of King County. You get three flavors: orange and cream, green apple and cream soda. It’s a tasty way to do something good for the community.